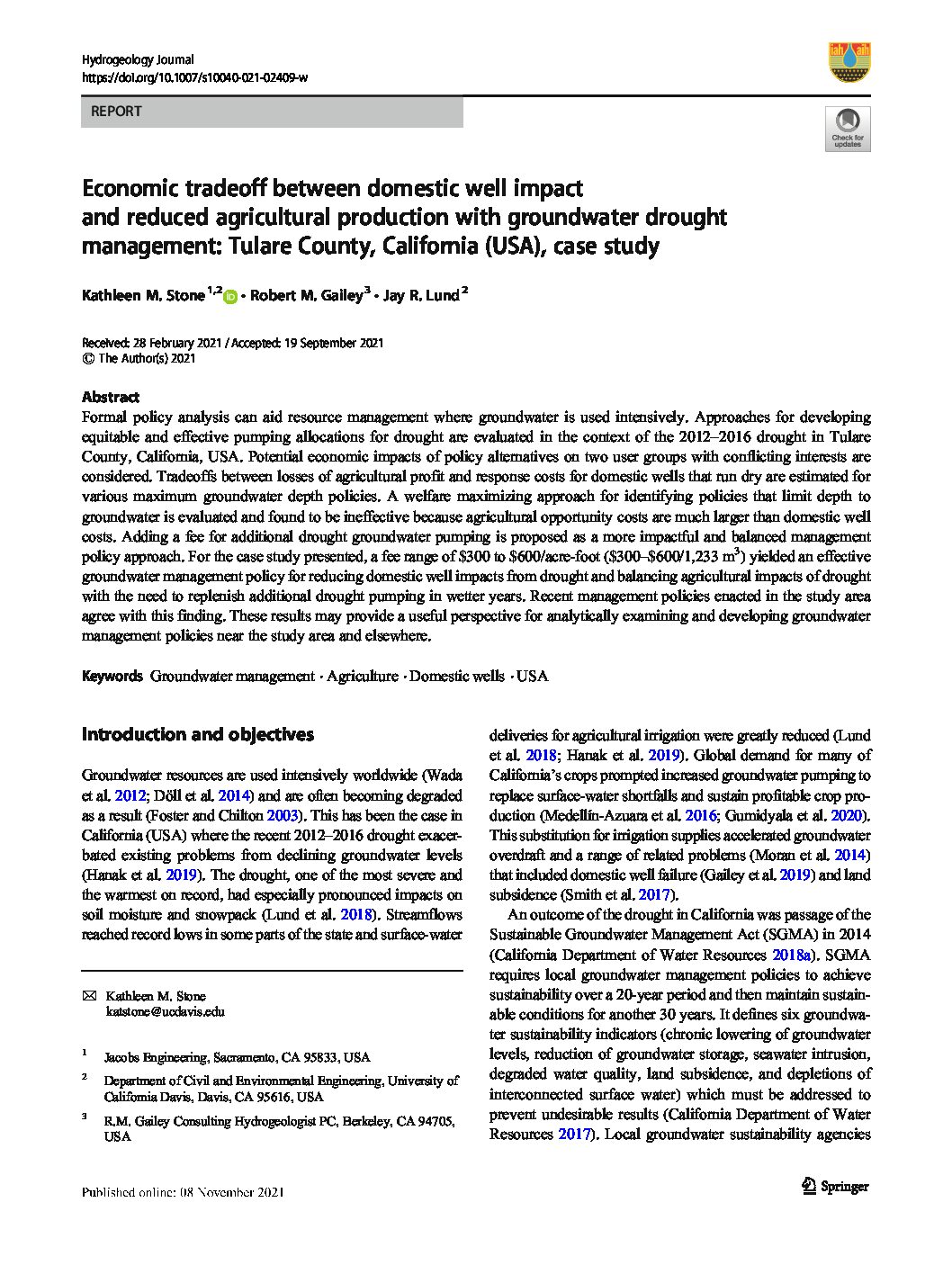 Formal policy analysis can aid resource management where groundwater is used intensively. Approaches for developing equitable and effective pumping allocations for drought are evaluated in the context of the 2012–2016 drought in Tulare County, California, USA. Potential economic impacts of policy alternatives on two user groups with conflicting interests are considered. Tradeoffs between losses of agricultural profit and response costs for domestic wells that run dry are estimated for various maximum groundwater depth policies. A welfare maximizing approach for identifying policies that limit depth to groundwater is evaluated and found to be ineffective because agricultural opportunity costs are much larger than domestic well costs. Adding a fee for additional drought groundwater pumping is proposed as a more impactful and balanced management policy approach. For the case study presented, a fee range of $300 to $600/acre-foot ($300–$600/1,233 m3) yielded an effective groundwater management policy for reducing domestic well impacts from drought and balancing agricultural impacts of drought with the need to replenish additional drought pumping in wetter years. Recent management policies enacted in the study area agree with this finding. These results may provide a useful perspective for analytically examining and developing groundwater management policies near the study area and elsewhere. 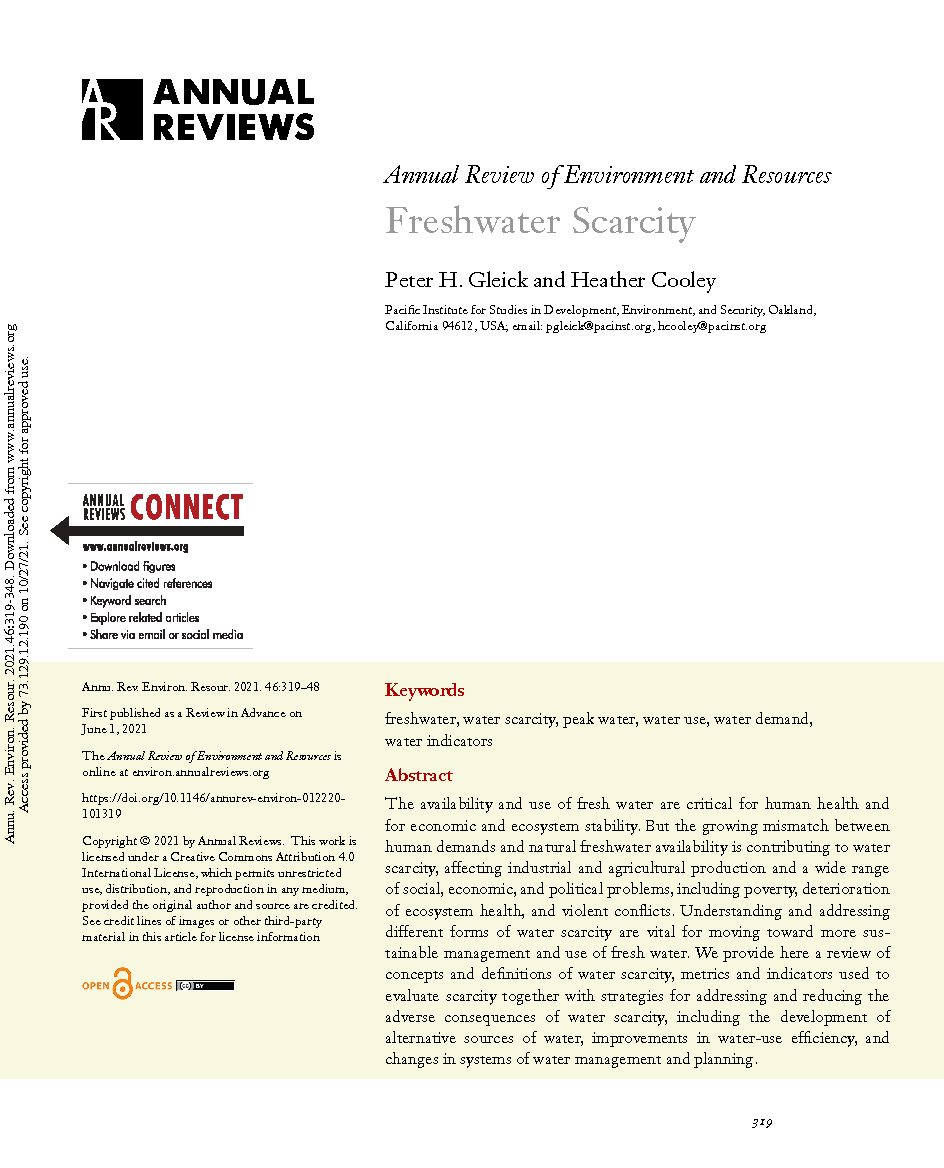 The availability and use of fresh water are critical for human health and for economic and ecosystem stability. But the growing mismatch between human demands and natural freshwater availability is contributing to water scarcity, affecting industrial and agricultural production and a wide range of social, economic, and political problems, including poverty, deterioration of ecosystem health, and violent conflicts. Understanding and addressing different forms of water scarcity are vital for moving toward more sustainable management and use of fresh water. We provide here a review of concepts and definitions of water scarcity, metrics and indicators used to evaluate scarcity together with strategies for addressing and reducing the adverse consequences of water scarcity, including the development of alternative sources of water, improvements in water-use efficiency, and changes in systems of water management and planning. 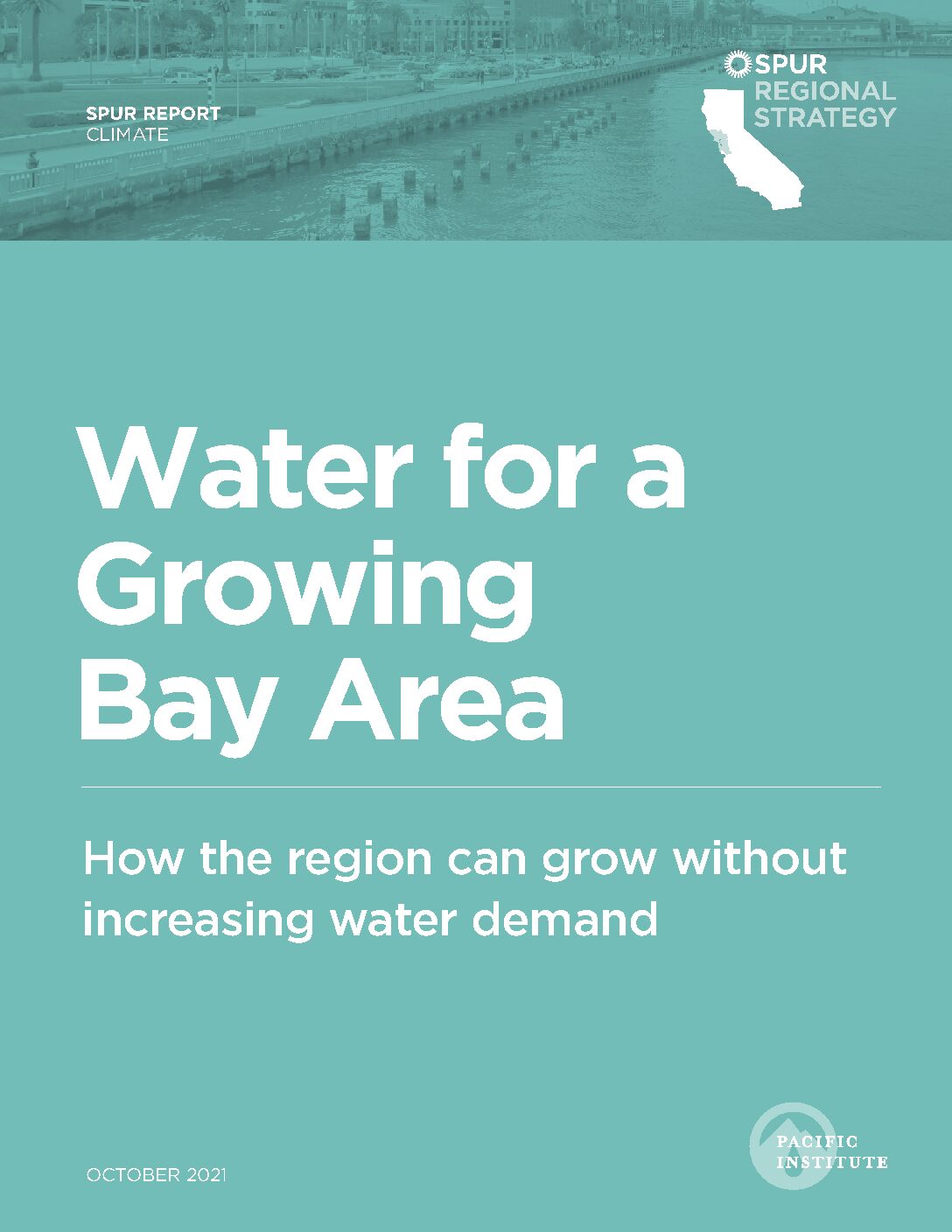 The San Francisco Bay Area is at a crossroads. The region, blessed with a beautiful natural setting, multiple shipping ports and world-class universities, is a driver of global economic growth. But the region’s housing supply has not kept up with population growth. Many low-income households, disproportionately made up of people of color, have been forced into overcrowded and substandard housing or displaced from the urban center to new neighborhoods far from their jobs, friends and families. The most vulnerable have lost their homes entirely and are among the region’s 35,000 unhoused people. Over the next half-century, the Bay Area’s need to add housing will only grow more intense. The region is projected to add 2 million new jobs by 2070, which would attract as many as 6.8 million people, and needs to build at least 2.2 million new housing units just to prevent housing affordability from worsening. This represents 83% more people, 74% more housing units and 38% more jobs over the next 50 years. 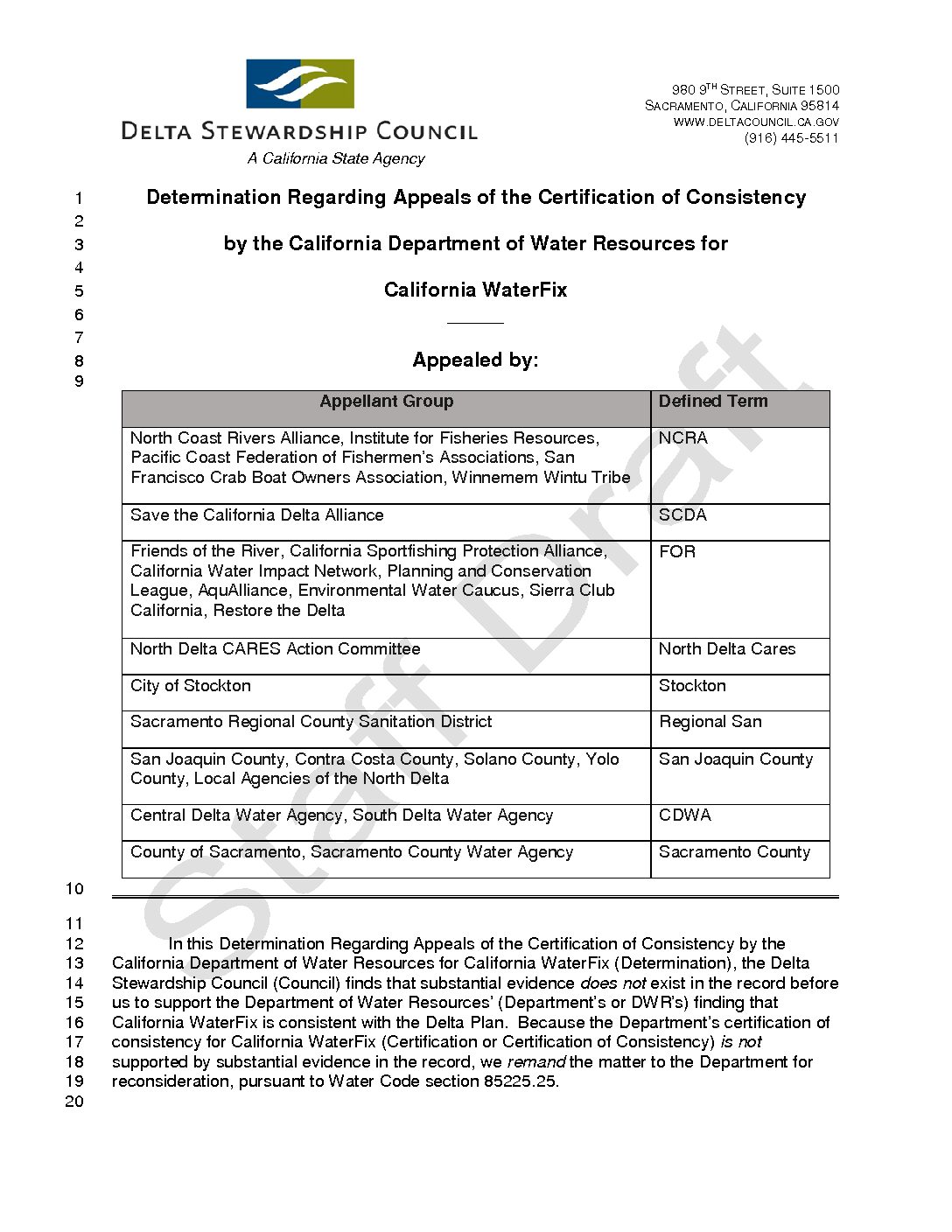 For background and associated materials, go to the Delta Stewardship Council 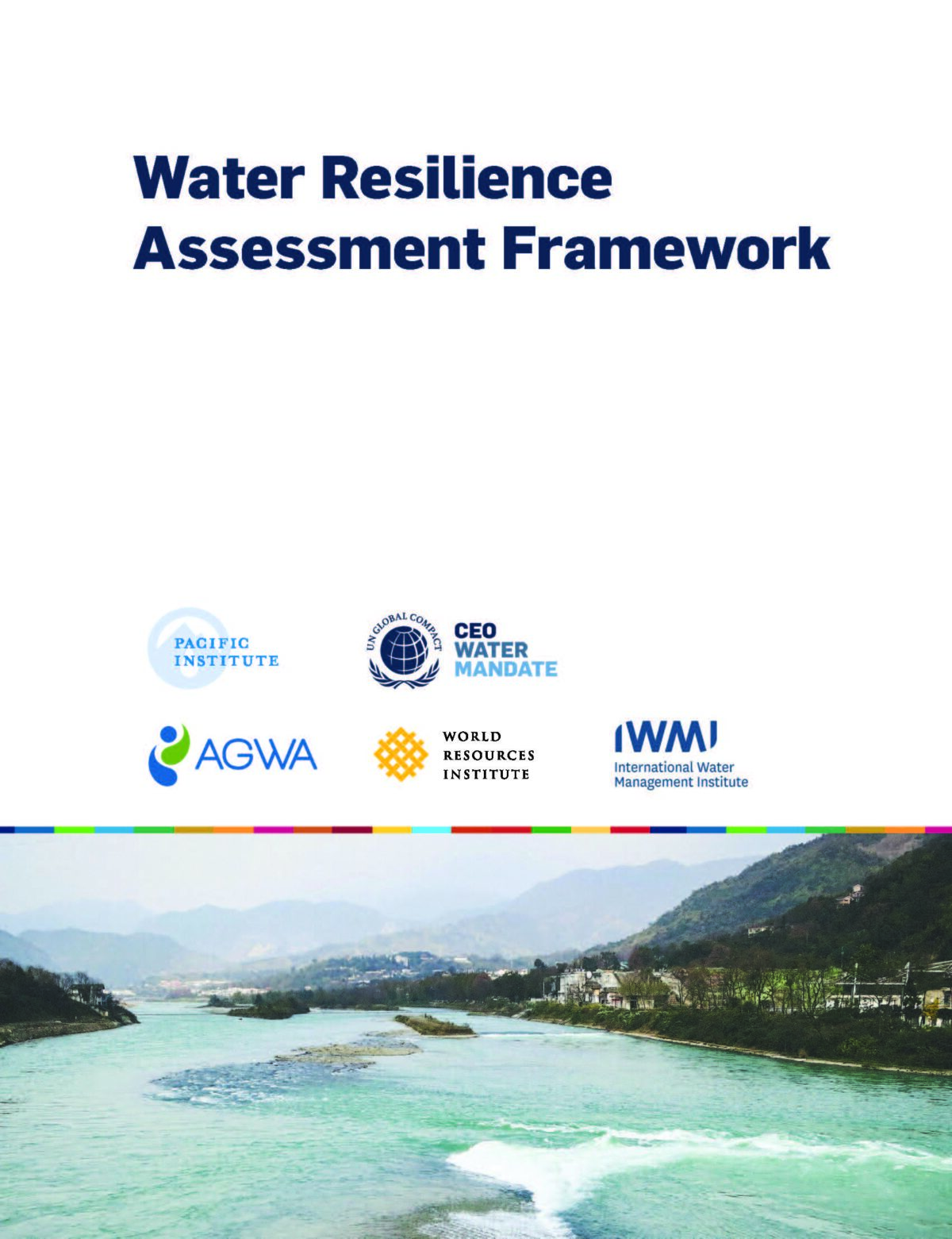 A traditional saying in China is that the water that holds the boat afloat is the same that sinks it. In the context of climate change, water is both a threat and a solution for most climate impacts. Climate change is driving many types of water challenges, such as water scarcity and abundance, worsening water quality, and shifts in timing of the hydrologic cycle. Shocks and stresses, both predictable and unforeseen, affect the resilience of water systems and the stakeholders that rely on them. Specific guidance on how to understand system resilience and measure systematic changes and intervening actions can ensure a more resilient future for all.

The Water Resilience Assessment Framework (WRAF) is intended to inform resilient decision-making to avoid shocks and stresses from becoming crises. The WRAF emphasizes water resilience, not only because water is vital for life, but also because water is embedded in nearly every aspect of our daily lives and the systems that enable and fuel our economies—often in ways we cannot see and do not regularly think about. As such, the WRAF is a method to be used, either individually or collectively, along with existing water-management processes and approaches to gain insight into how we measure progress towards building long-term water resilience. 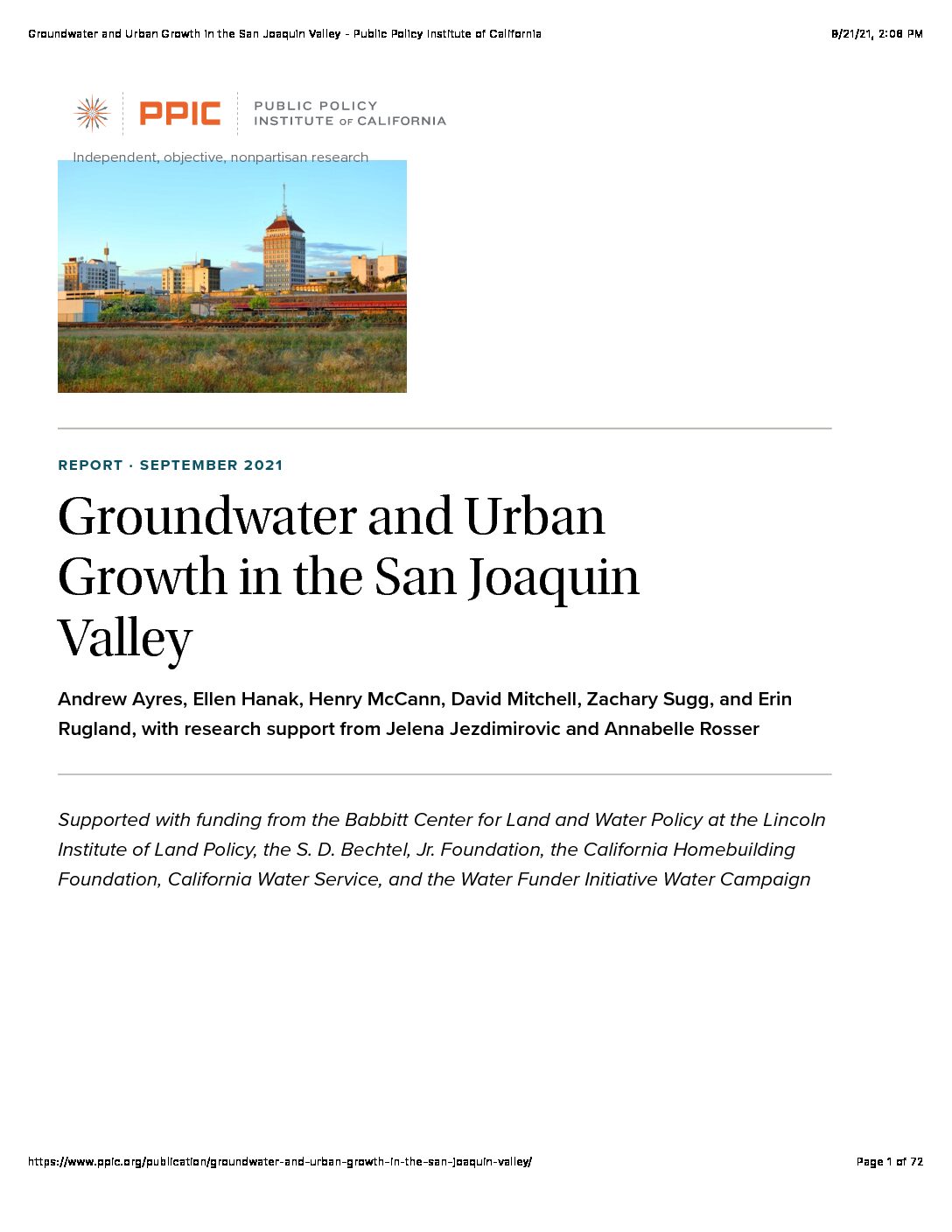 The San Joaquin Valley is ground zero for the Sustainable Groundwater Management Act (SGMA). It has the largest groundwater deficit in California and faces some of the worst impacts from overdraft, including land subsidence and drying wells. SGMA will help the region address these issues—while also building its climate resilience. But this will require hard work, not only by farmers—the largest groundwater users—but also by the valley’s urban water utilities, which serve a growing population while relying mostly on groundwater. As the valley confronts limits on groundwater pumping, urban utilities, local land use authorities, other water users, and state agencies must all engage to ensure a smooth transition for the region’s residents. 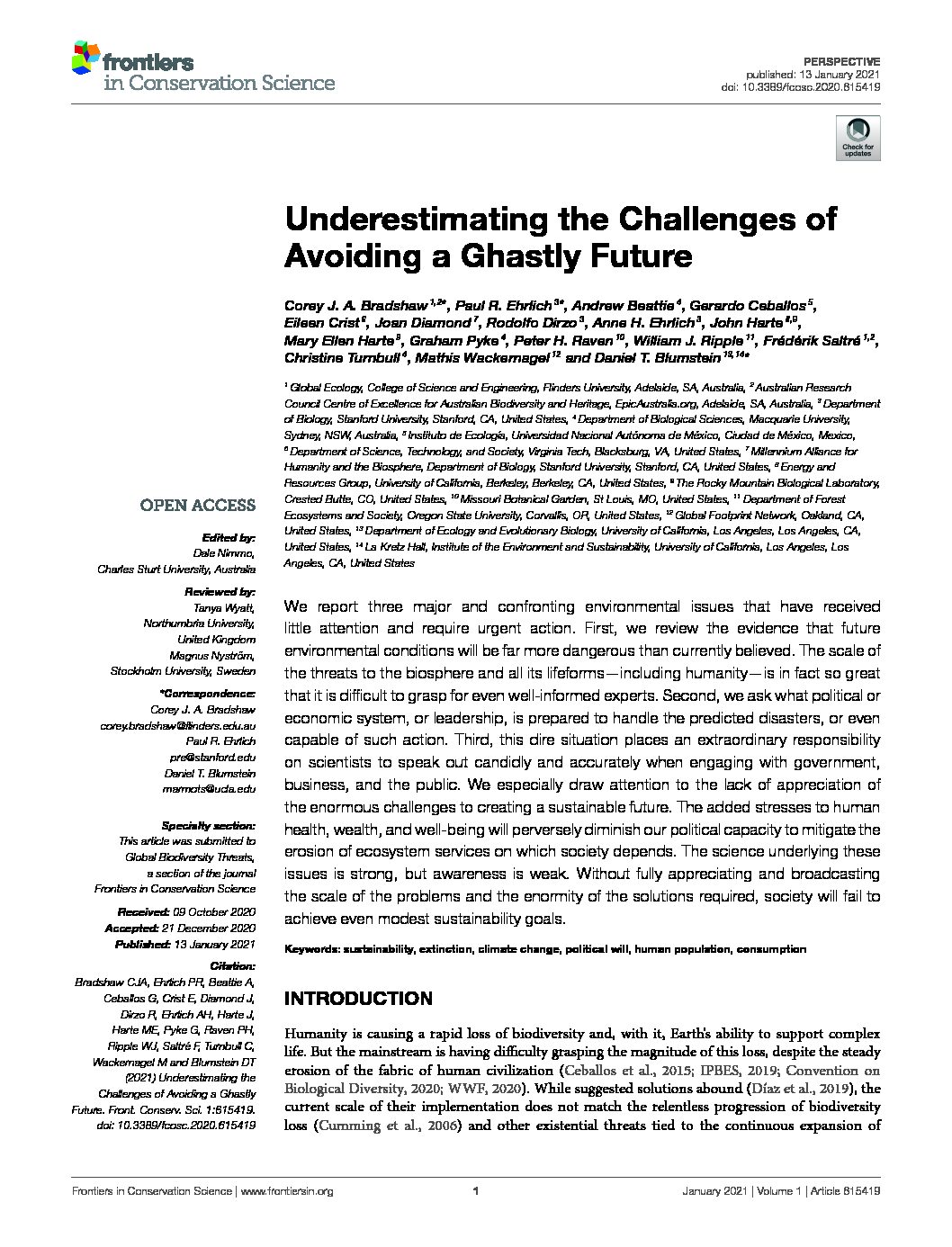 We report three major and confronting environmental issues that have received little attention and require urgent action. First, we review the evidence that future environmental conditions will be far more dangerous than currently believed. The scale of the threats to the biosphere and all its lifeforms—including humanity—is in fact so great that it is difficult to grasp for even well-informed experts. Second, we ask what political or economic system, or leadership, is prepared to handle the predicted disasters, or even capable of such action. Third, this dire situation places an extraordinary responsibility on scientists to speak out candidly and accurately when engaging with government, business, and the public. We especially draw attention to the lack of appreciation of the enormous challenges to creating a sustainable future. The added stresses to human health, wealth, and well-being will perversely diminish our political capacity to mitigate the erosion of ecosystem services on which society depends. The science underlying these issues is strong, but awareness is weak. Without fully appreciating and broadcasting the scale of the problems and the enormity of the solutions required, society will fail to achieve even modest sustainability goals. 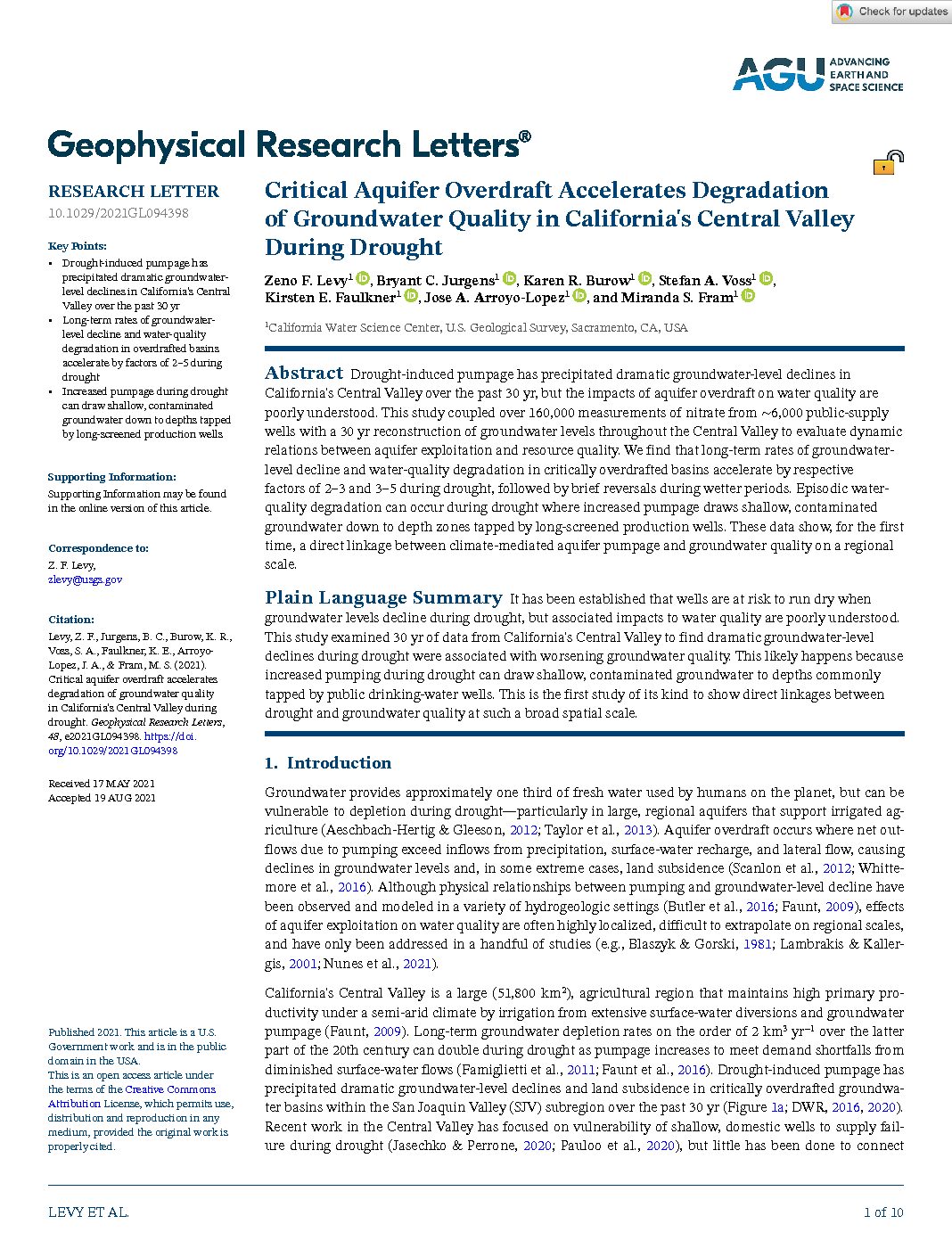 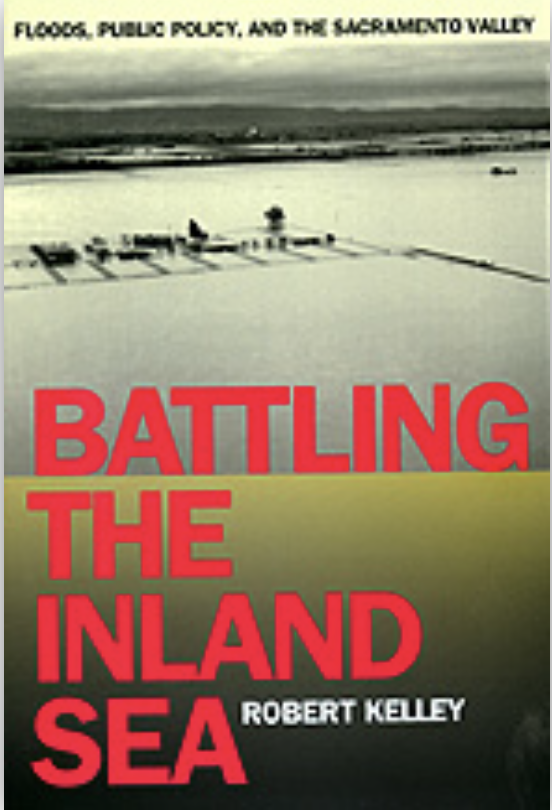 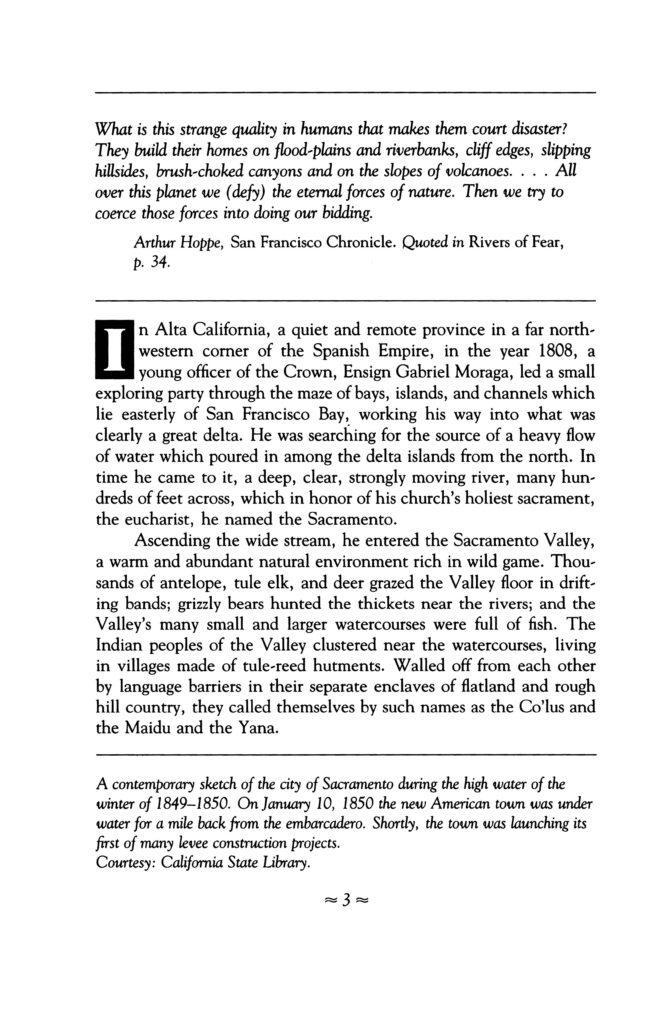 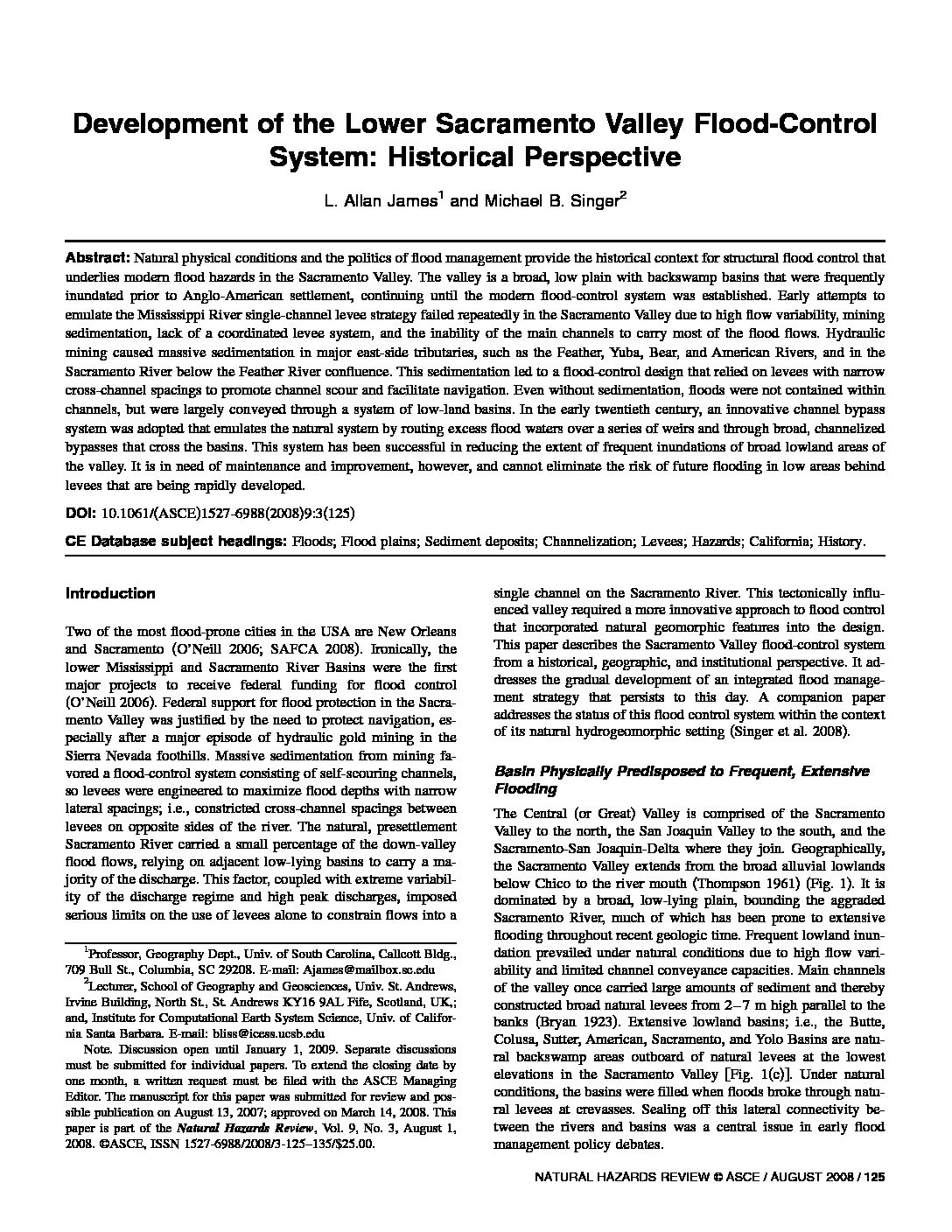 Natural physical conditions and the politics of flood management provide the historical context for structural flood control that underlies modern flood hazards in the Sacramento Valley. The valley is a broad, low plain with backswamp basins that were frequently inundated prior to Anglo-American settlement, continuing until the modern flood-control system was established. Early attempts to emulate the Mississippi River single-channel levee strategy failed repeatedly in the Sacramento Valley due to high flow variability, mining sedimentation, lack of a coordinated levee system, and the inability of the main channels to carry most of the flood flows. Hydraulic mining caused massive sedimentation in major east-side tributaries, such as the Feather, Yuba, Bear, and American Rivers, and in the Sacramento River below the Feather River confluence. This sedimentation led to a flood-control design that relied on levees with narrow cross-channel spacings to promote channel scour and facilitate navigation. Even without sedimentation, floods were not contained within channels, but were largely conveyed through a system of low-land basins. In the early twentieth century, an innovative channel bypass system was adopted that emulates the natural system by routing excess flood waters over a series of weirs and through broad, channelized bypasses that cross the basins. This system has been successful in reducing the extent of frequent inundations of broad lowland areas of the valley. It is in need of maintenance and improvement, however, and cannot eliminate the risk of future flooding in low areas behind levees that are being rapidly developed.