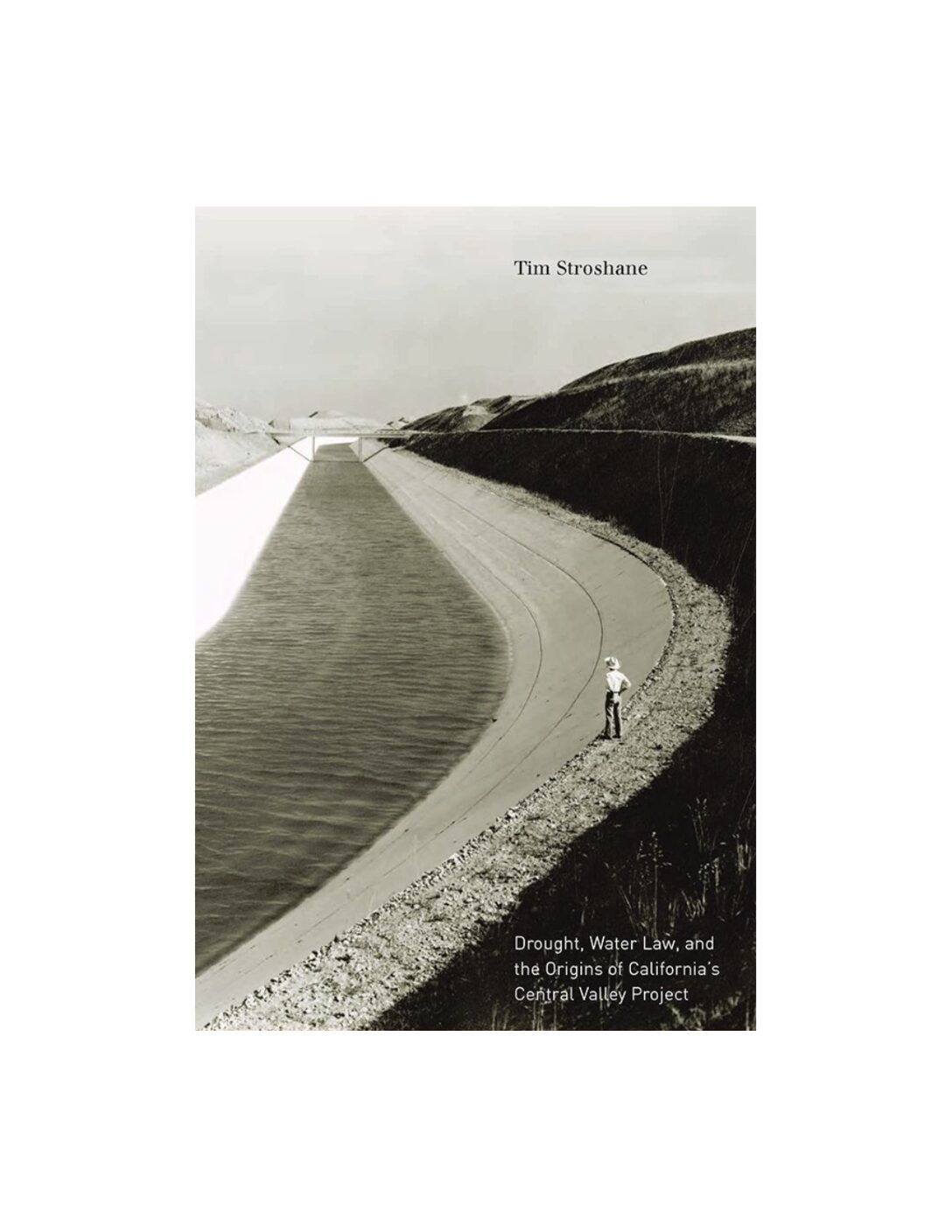 This book is an account of how water rights were designed as a key part of the state’s largest public water system, the Central Valley Project. Along sixty miles of the San Joaquin River, from Gustine to Mendota, four corporate entities called “exchange contractors” retain paramount water rights to the river. Their rights descend from the days of the Miller & Lux Cattle Company, which amassed an empire of land and water from the 1850s through the 1920s and protected these assets through business deals and prolific litigation. Miller & Lux’s dominance of the river relied on what many in the San Joaquin Valley regarded as wasteful irrigation practices and unreasonable water usage. Economic and political power in California’s present water system was born of this monopoly on water control. Stroshane tells how drought and legal conflict shaped statewide economic development and how the grand bargain of a San Joaquin River water exchange was struck from this monopoly legacy, setting the stage for future water wars. His analysis will appeal to readers interested in environmental studies and public policy. 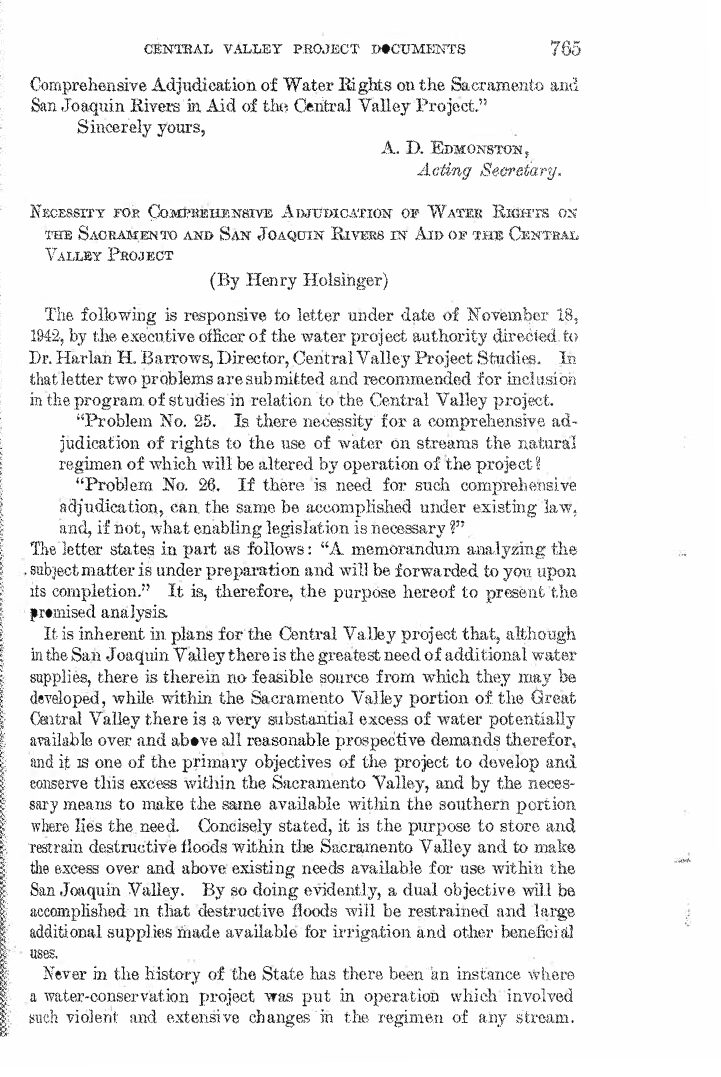 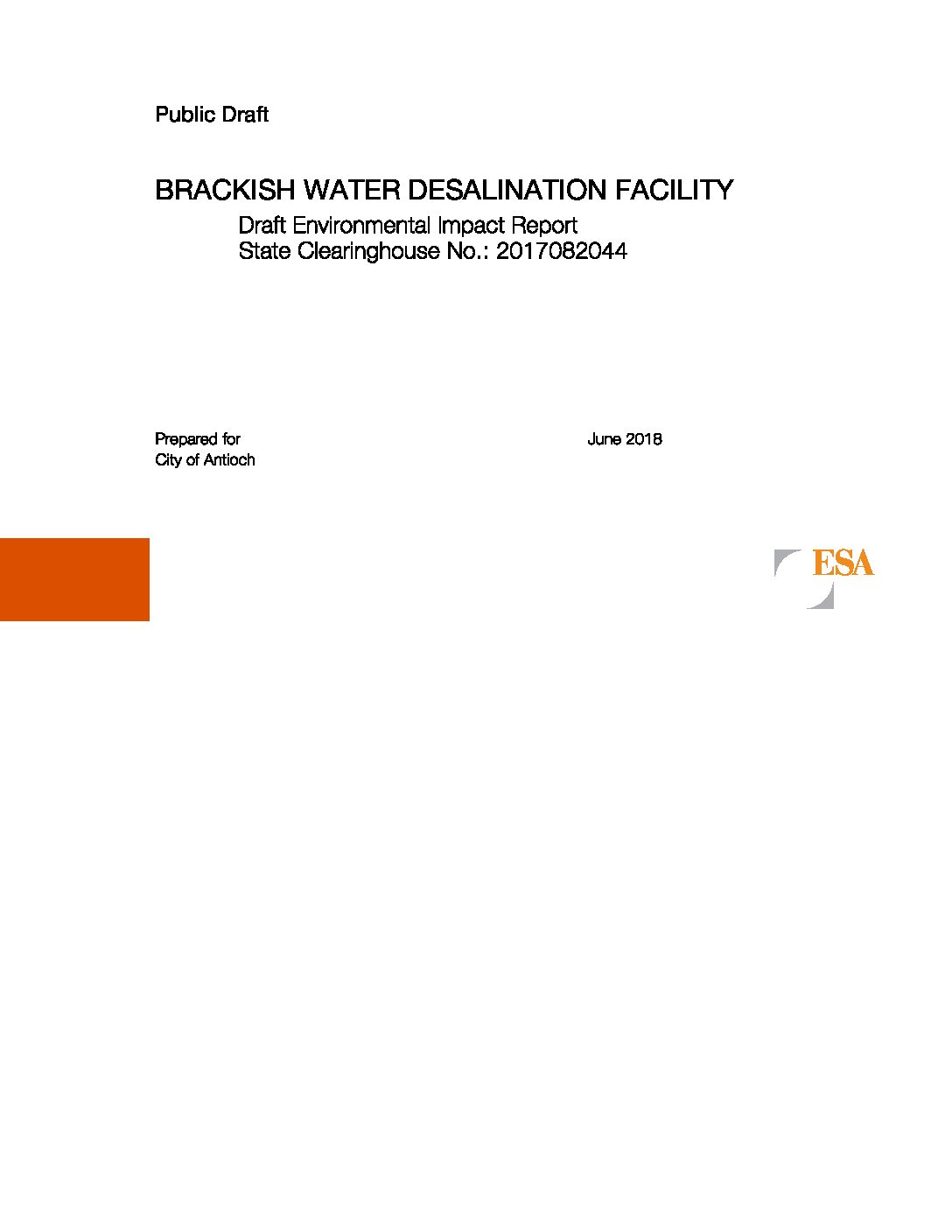 The City proposes to construct, operate, and maintain the Antioch Brackish Water Desalination Project (proposed project). The City proposes to replace the existing San Joaquin River intake pump station, construct a desalination facility with associated equipment and appurtenances; and construction of pipelines for the conveyance of source water and brine concentrate. The desalination plant would have the capacity to produce up to 6 million gallons per day (mgd) of desalinated product water to offset use of purchased water.

Due to size, this file has been divided into two parts. 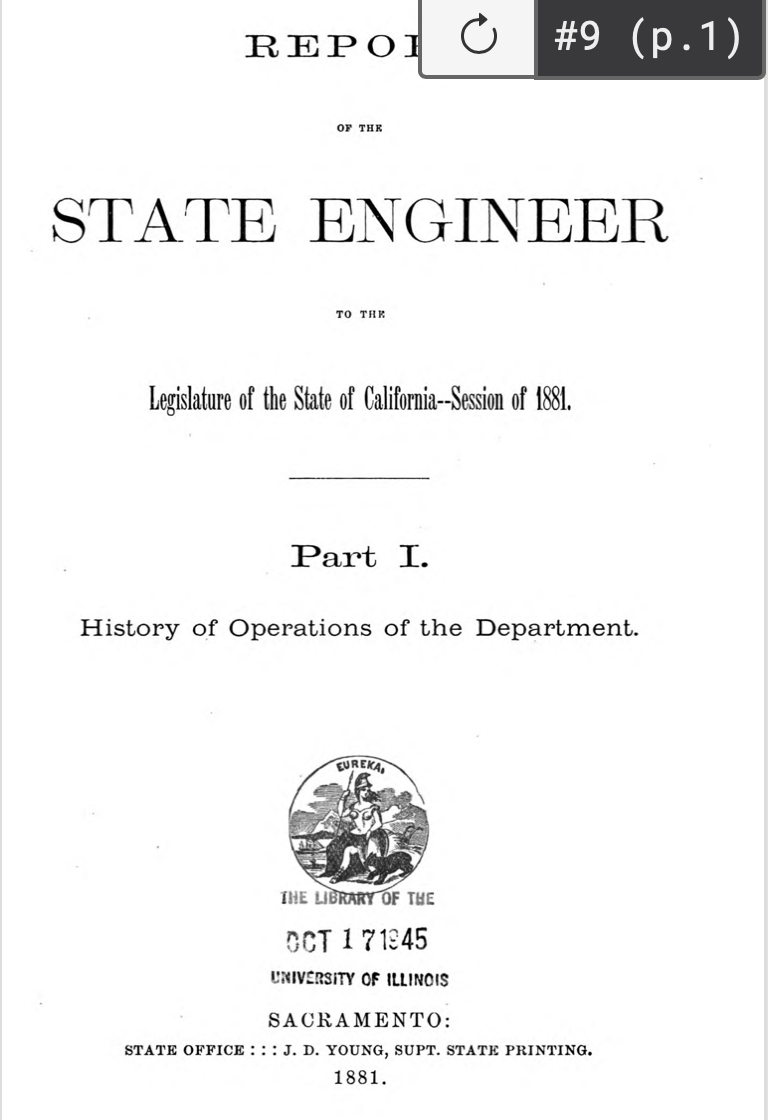 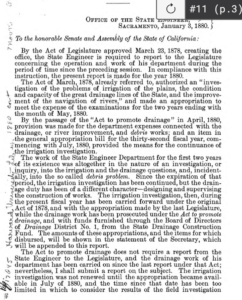 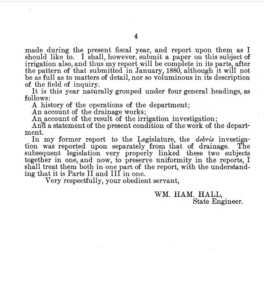 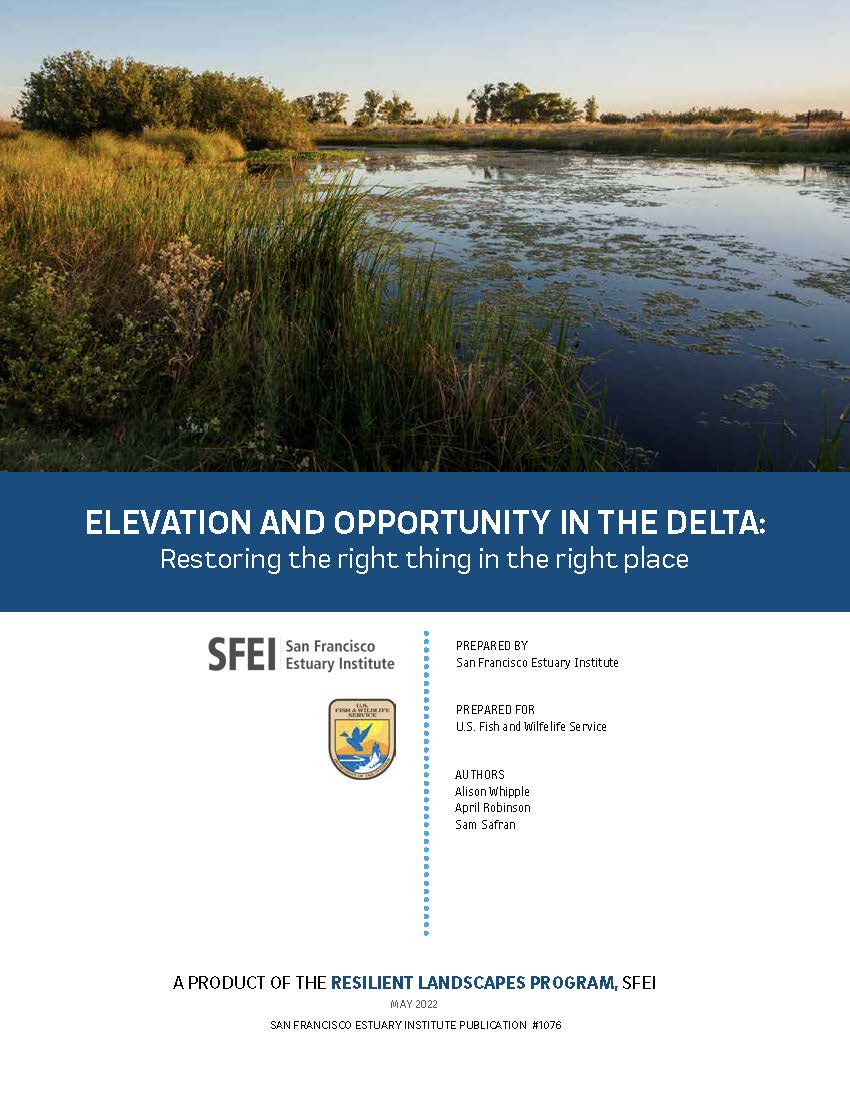 A future Sacramento-San Joaquin Delta and Suisun Marsh (“Delta” herein) that supports healthy
ecosystems and native species, while also meeting flood risk reduction, water supply, water quality,
carbon sequestration, economic, and cultural objectives, requires that appropriate restoration
and management actions be taken in the right place at the right time. Geographic setting affects
the potential opportunities available—not all actions are suitable everywhere. Physical factors
determining what types of activities are appropriate now and in the future include a site’s elevation,
degree of tidal and fluvial influence, salinity, soil type, and local effects of climate change, which
all vary spatially across the Delta. While there has been considerable progress over the last several
decades, continued acceleration of the pace and scale of enhancement actions appropriate to
landscape position is needed. Understanding the physical template is necessary for developing
strategies that move beyond opportunistic restoration, support resilience over time, and have the
potential to connect and magnify benefits across the larger landscape. 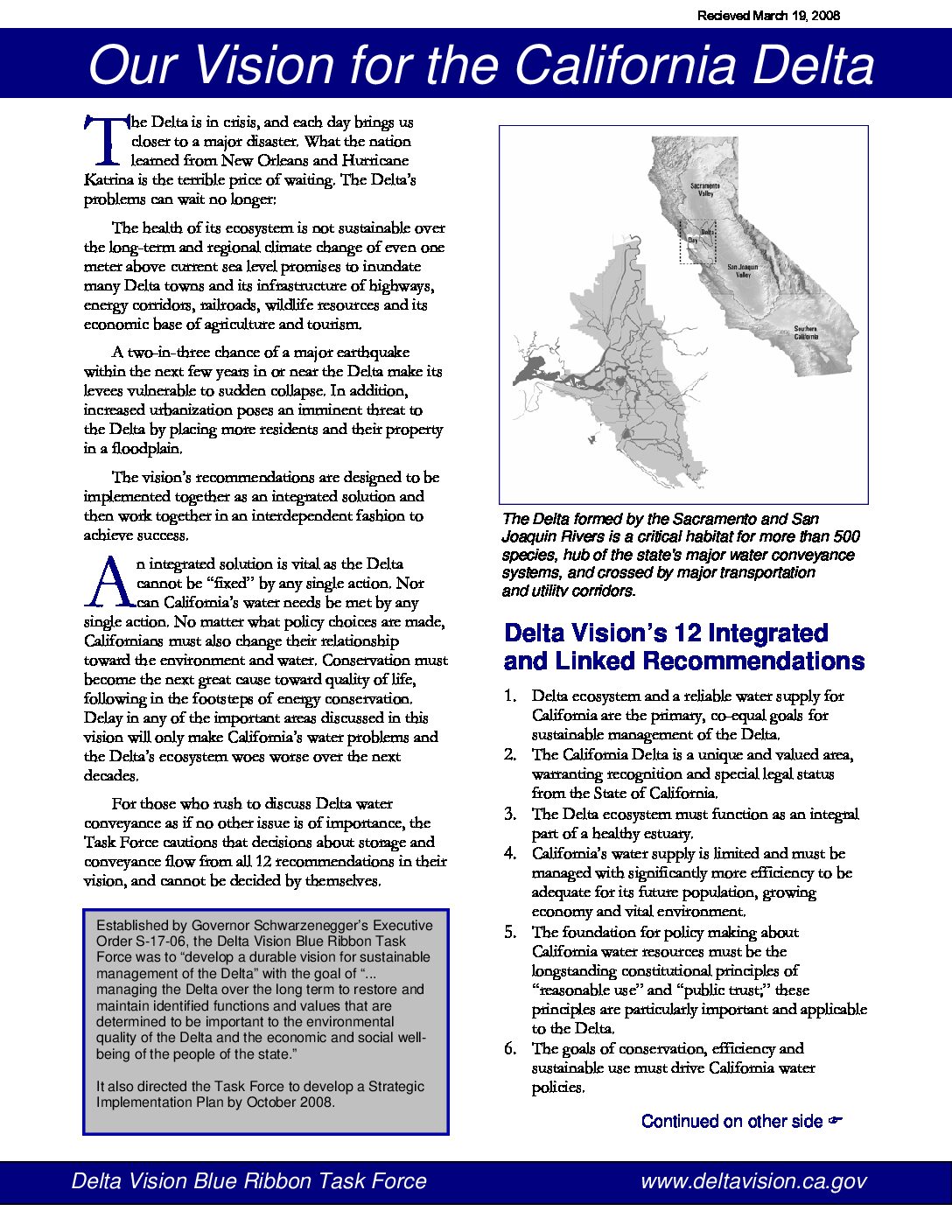 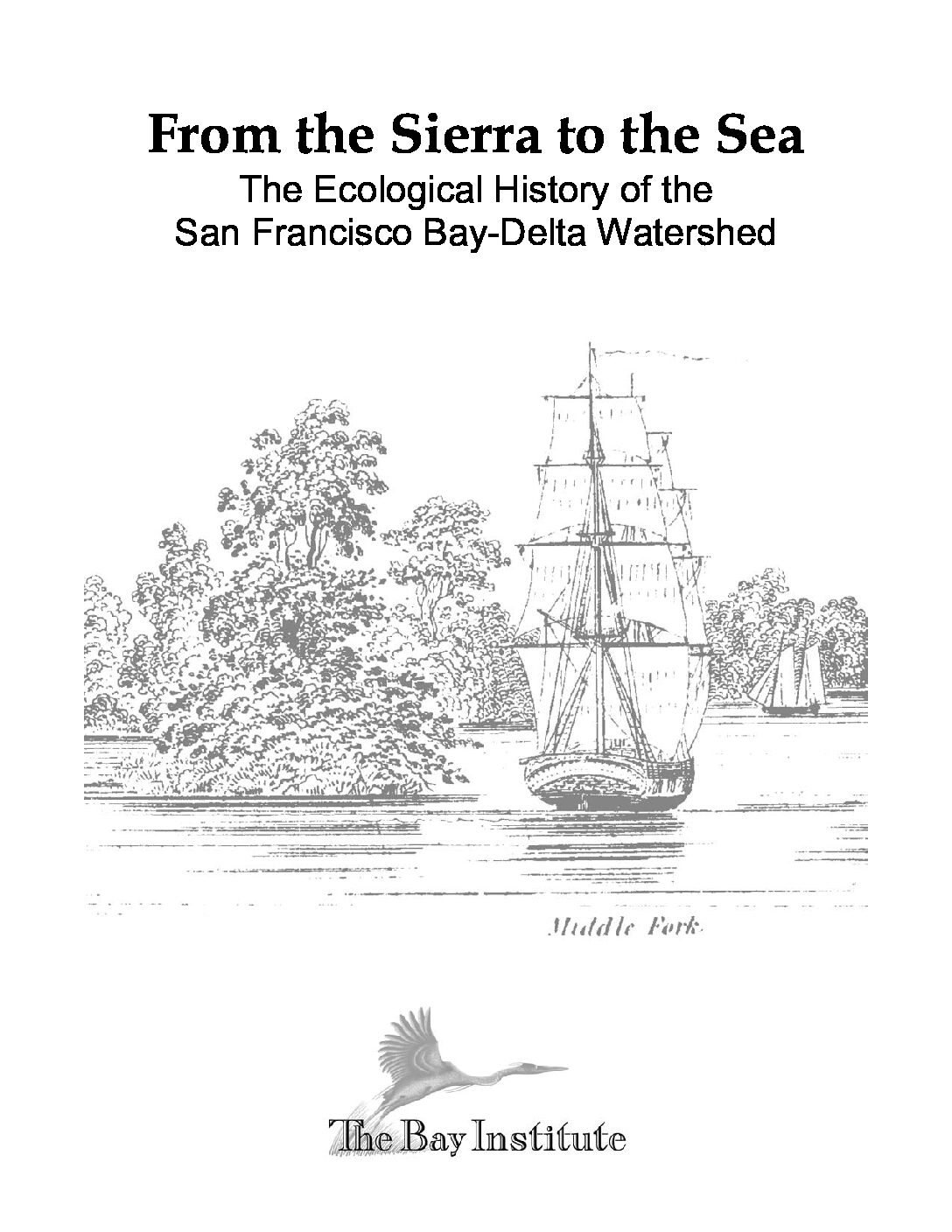 A vast watershed connects the mountain streams surrounding California’s Central Valley with San Francisco Bay and the ocean beyond. Over the course of the last two centuries, much of the natural productivity, biodiversity and ecological integrity of the watershed has been destroyed by modifying the environment without fully understanding the long-term environmental consequences. Long the site of some of the nation’s most intensive conflicts over the use of land and water resources, this system is now emerging as the focus of one of the most ambitious ecological restoration efforts ever undertaken in the United States.

This report was designed to provide a coherent and defensible ecological framework and information base for restoration. The need for such an historical, broad-scale perspective on system ecology stems from two fundamental principles of ecological restoration – the need to manage toward a natural template and to manage at ecosystem and landscape levels. 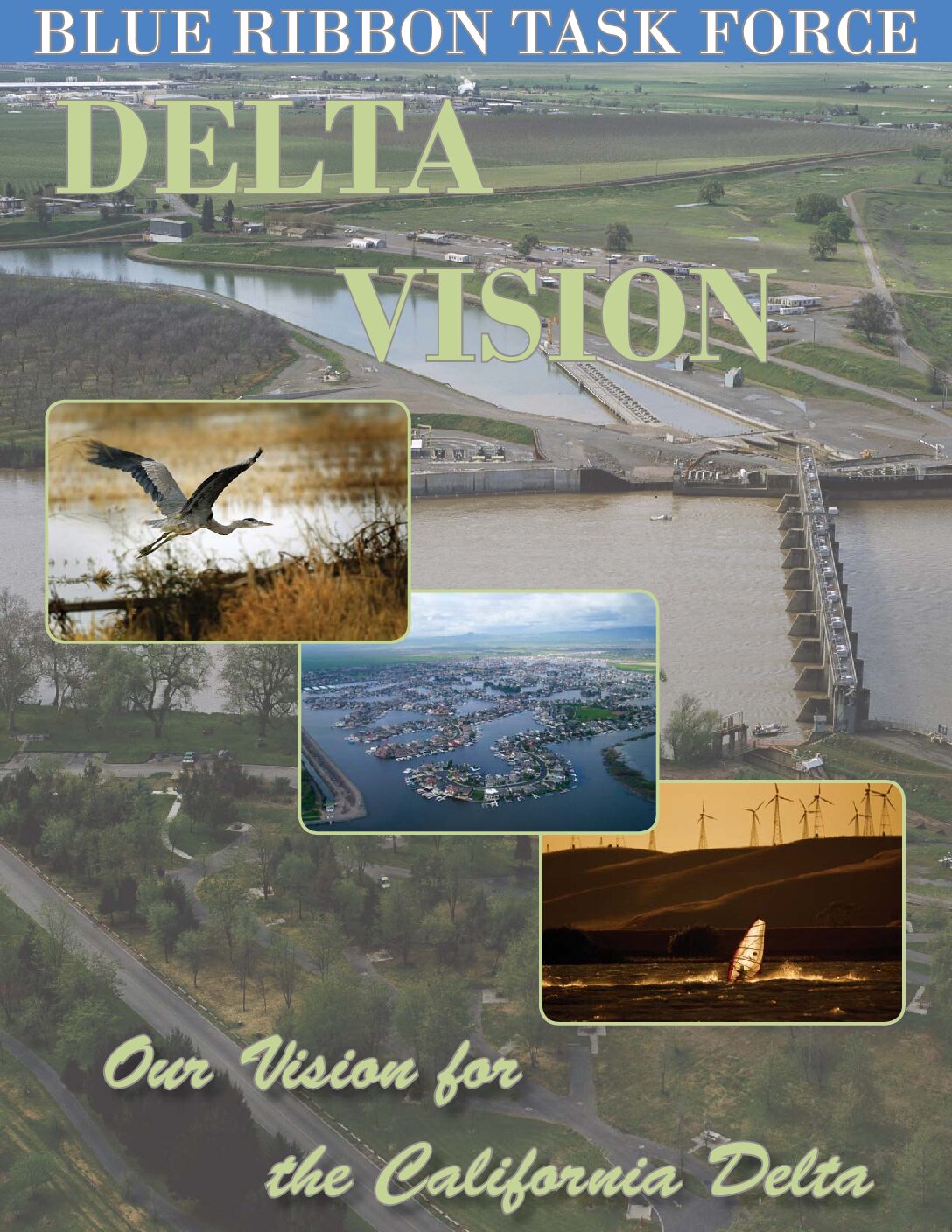 Executive Order S-17-06, directed us to “develop a durable vision for sustainable management of the Delta” with the goal of “…managing the Delta over the long term to restore and maintain identified functions and values that are determined to be important to the environmental quality of the Delta and the economic and social well being of the people of the state.” The executive order calls for our vision to be completed by January 1, 2008 and a strategic plan by November 2008. 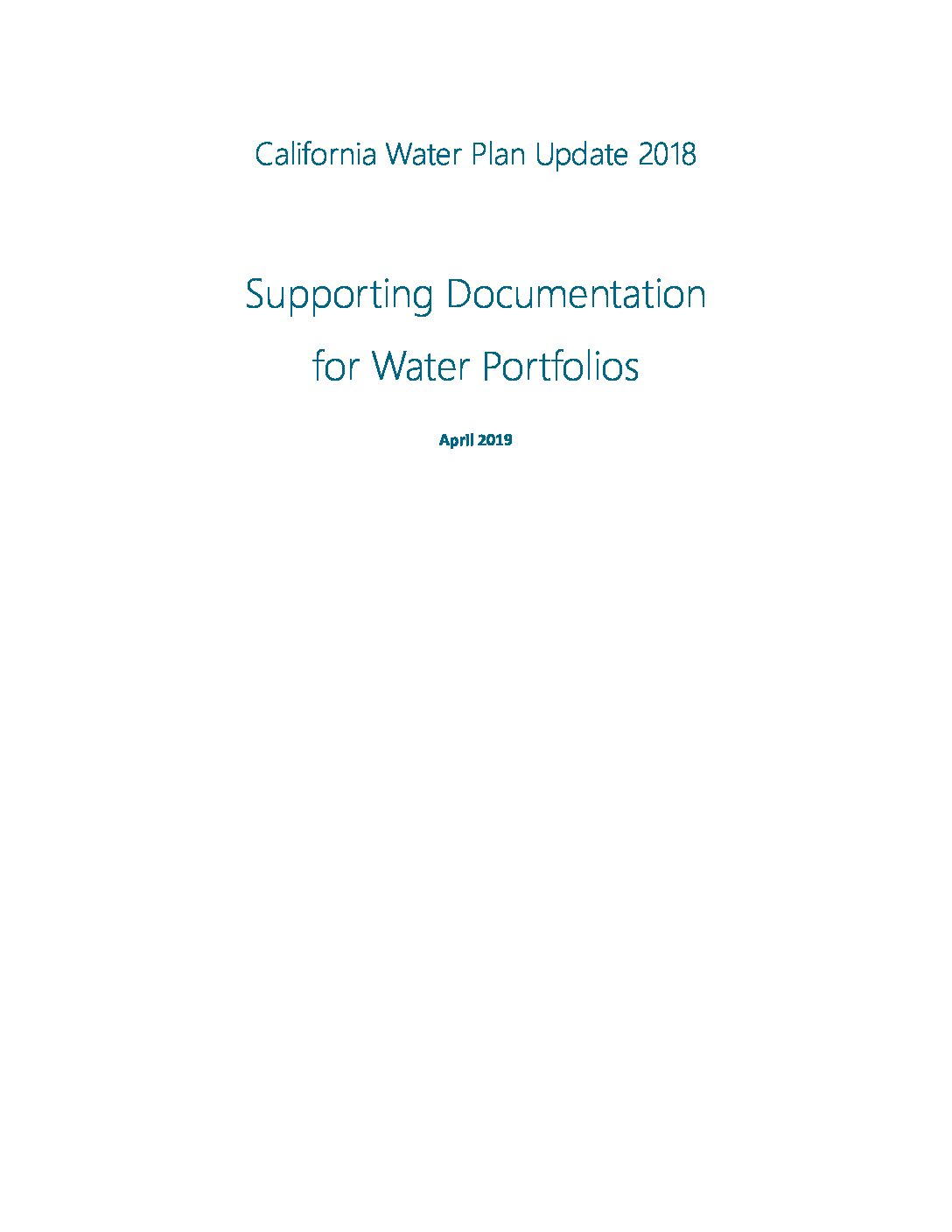 California Water Plan Update 2018 (Update 2018) supporting documentation for water portfolios includes descriptions and accountings of water uses and their supplies for the state in Figures 1 and 5, and for 10 hydrologic regions in Figures 7 through 16. They include pictures of conditions in California, along with water balance data for Water Years (WYs) 2011–2015. Regional inflow and outflow Figures 17 and 18 provide a geographic overview of California and surface water inflows and outflows with adjoining states, between hydrologic regions, and to the Pacific Ocean, for a wet year between two drought sequences, and a critically dry year in a drought sequence. More extreme and variable hydrology seems to have become the new normal, and not just for California. California has been, and will continue to be, a useful example of extremes brought on by a wide variety of climates and terrains. To better understand these diversities, plan for future needs, and move toward water resources sustainability, the California Department of Water Resources (DWR) analyzes water use and supply conditions for each water year at various spatial scales for the entire state. This accounting of water uses and supplies is the only statewide analysis that exists. The California Water Plan (Water Plan) water balance data is used by many in and out of the water community. Data and information requests come from other DWR programs, State and federal agencies, cities and counties, local water agencies and purveyors, research institutes, universities, non-governmental organizations, private sector companies, lawyers, elected officials, news media, documentaries, book writers, students, interested public, other states, and even other countries because California is recognized as a leader in integrated water resources management. The following excerpt is from Update 2018, Chapter 1, “California Water Today,” section on California’s Diverse Water Supplies and Uses. 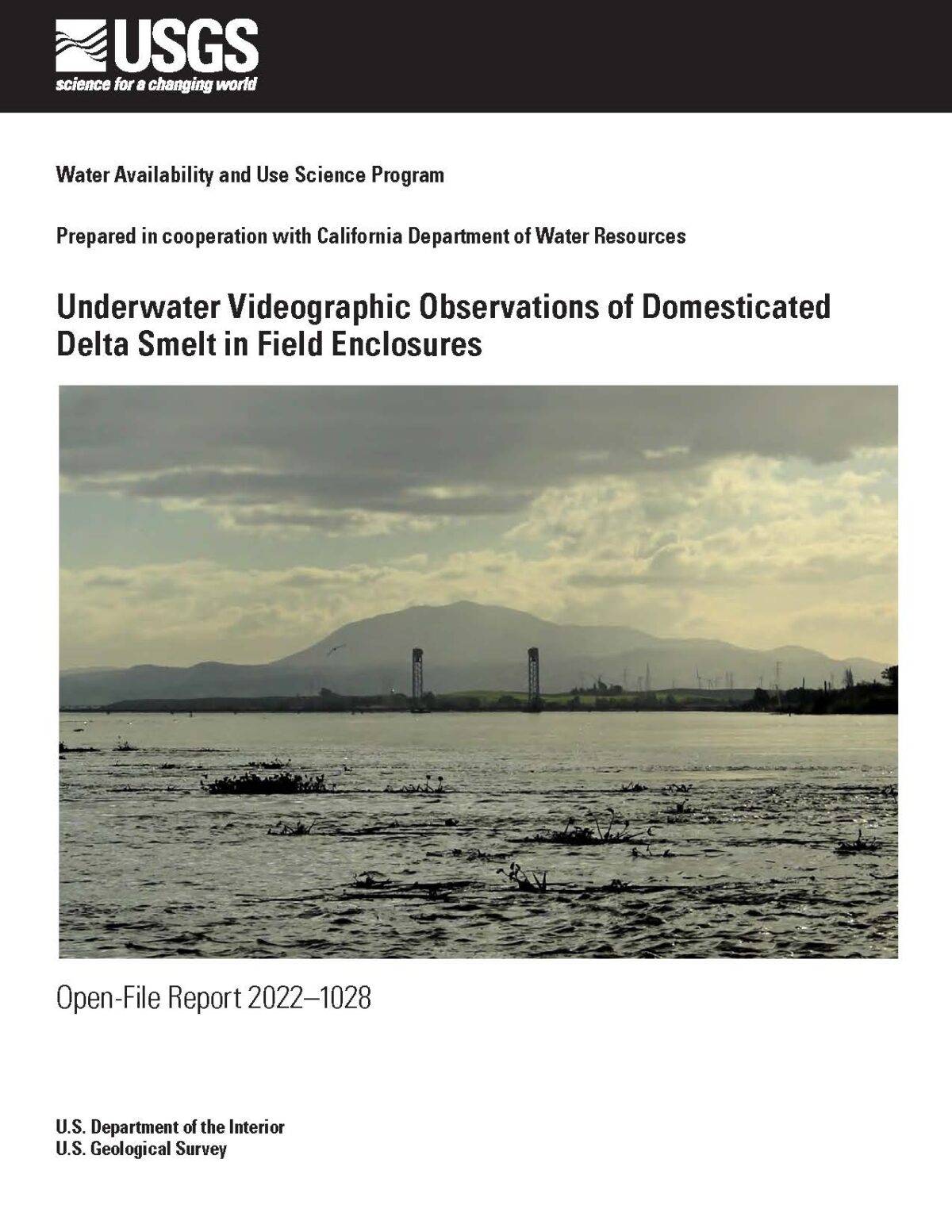 The delta smelt (Hypomesus transpacificus) is a small, euryhaline fish species endemic to the Sacramento–San Joaquin Delta; it is protected under the U.S. and California Endangered Species Acts, and because of declines in population abundance, the delta smelt may be vulnerable to extinction. The California Department of Water Resources (DWR) is conducting studies to test the viability of using domesticated fish to supplement the wild population of delta smelt. These studies have focused on examining the health and survival of domesticated delta smelt placed inside enclosures (circular cages that are approximately 1.5 meters tall by 1 meter in diameter) into the wild. We completed two parts within this study using underwater cameras inside the enclosures to observe fish behavior and their responses to certain stimuli. In both parts of the study, delta smelt behaviors were broadly categorized into two basic categories: (1) normal and (2) alarm. Normal behavior was characterized as calm, non-polarized, and docile swimming behavior. Alarm behavior was characterized by sudden and rapid darting, polarized frantic swimming activity, and tighter schooling polarization of individuals.

The first part of the study took place in a semi-controlled agricultural pond on the campus of the University of California, Davis. At this agricultural pond, we developed methods of observation and documented how fish behaved in response to enclosure disturbances associated with routine cleaning and service that is required during extended field deployments of the enclosures. We observed that delta smelt behavior changed from normal to alarm at the onset of an enclosure service and from alarm to normal within about 2 minutes after the service ended.

The second part of the study was completed in cooperation with the DWR. In October 2019, DWR deployed three enclosures in the Sacramento River near Rio Vista, California. To monitor survival rate of delta smelt, DWR permitted us to deploy cameras in one enclosure to document the frequency and duration of alarm behaviors exhibited by delta smelt and the frequency, duration, and intensity of three types of disturbances: (1) noise generated from passing boats, (2) noise generated from the enclosure moving in response to wave energy, and (3) vertical movements of the enclosure generated from wave energy. Alarm behaviors averaged about 2 minutes in duration and occurred most frequently during the evening compared to midday or morning. Each disturbance variable exhibited substantial variability in duration and intensity and occurred least frequently during the morning and evening compared to midday. Alarm behaviors appeared to be most associated with high intensity enclosure noises and vertical movements; however, limited replicate samples prohibited developing a statistical relation. Alarm behaviors did not directly contribute to injury or mortality of individual delta smelt; however, indirect or sublethal effects of alarm behaviors were not examined.